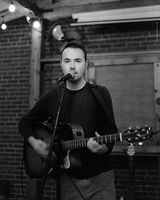 Carter is a singer/songwriter from Tulsa, OK. He has performed at various different venues and events in Oklahoma, such as Bushyhead Farm Festival (Kansas, OK), Bob Childer’s Gypsy Cafe (Stillwater, OK), Mayfest (Tulsa, OK), Hunt Club (Tulsa, OK), The Colony (Tulsa, OK), and more. Carter is the CEO of a record label and talent booking company called Project Records. Project Records assists in recording music and providing artists with gigs around the state of Oklahoma. Carter is also the creator of the Fur Fest music festival, located at The Fur Shop in Downtown Tulsa. Carter has appeared on various different media platforms to promote his performances, events, and other credits. These include Fox 23 News, KTUL Channel 8, Tulsa World, KOSU, RSU Public TV, Pod4Good Podcast, The Okie Podcast, and more. Carter has also been in various different chamber choirs. In his time at Northeastern State University, he toured with the University Singers. His most notable tour with the Singers was in Ireland, where they performed at St. Patrick’s Cathedral. The University Singers also toured in Dallas and performed at the Meyerson Symphony Center. Carter began writing rock songs at 15 years old. His early inspirations included Led Zeppelin, Radiohead, and Bee Gees. At 20 years old, he started performing solo acoustic acts. He then rallied a band, Studio House Project, to begin performing in 2021. They’d already released their first single, “Red Shingles”, in 2019, along with their self-titled LP that same year. Their 2nd single, “House of Praise”, was released in 2020. Carter loves to perform and experiment on stage. He pairs funky guitar rhythms with vocal bending practices to create an individual indie rock sound. He tailors his performances to the specific audiences present at his shows, covering classics from the 60s all the way to today; but in his own style. Carter stays motivated as a musician by chasing new music at all times. The members of his band, Studio House Project, play an essential role in his life for that reason. Carter actively performs across Oklahoma, whether it be by himself, with his band, or with other colleagues. He is currently working with his band to release their 2nd album. Carter acts as a talent booker, connecting artists with venues to create inclusive musical environments. He also sings with Vox Solaris, a Tulsa chamber choir directed by Dr. Jeffery Wall.